Here we go, next on the OSCP prep HTB retired boxes train!

It makes no sense, I don’t care. Anyway, Valentine!

Nmap: I choose you!

As always, start with an initial quick scan:

We get 3 ports back:

While that’s running, let’s go check out the 2 web servers.

Ok Port 80 has a cool picture 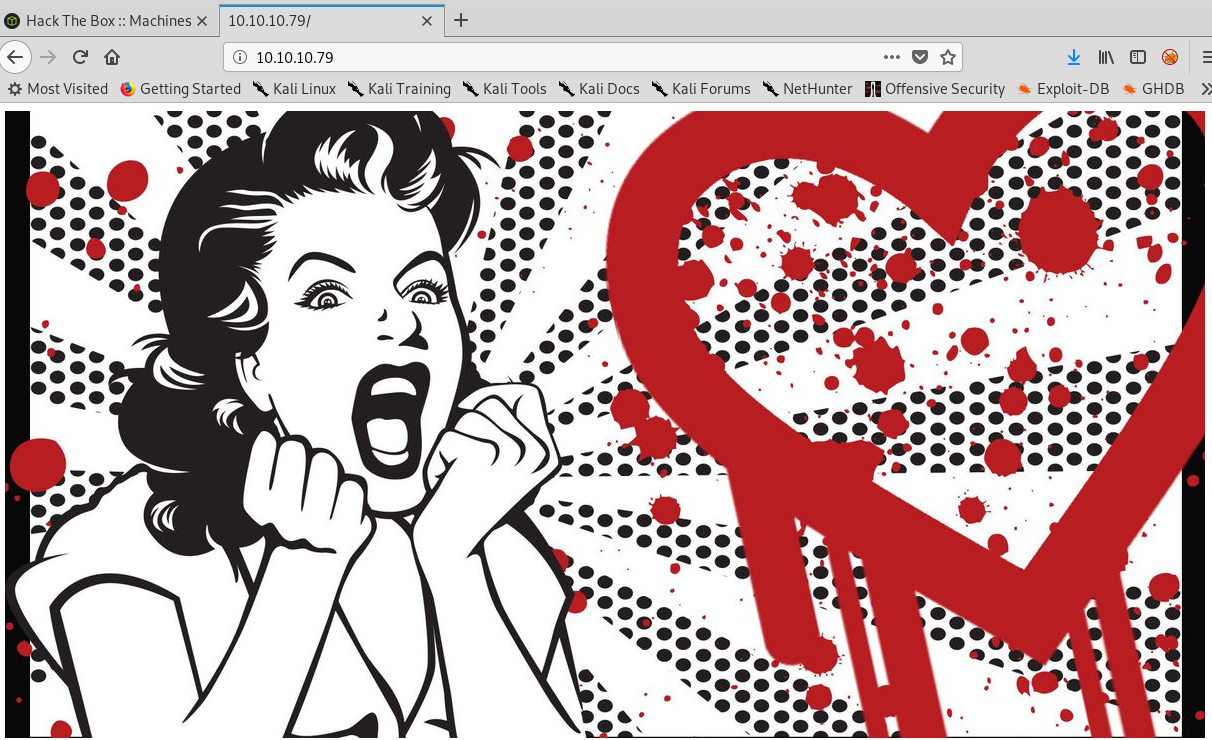 An image on it’s own always make me think stego. So let’s keep that in the back of our minds as we carry on.

So let’s run some gobustering on these!

The extra -k flag on the HTTPS is for skip certificate check.

Let’s leave those running as our nmap has finished it’s more detailed scan:

So there are a whole bunch of certs and RSA keys. This is a lot of information leakage that should really be sorted! They will all be public keys, so nothing of too much use other than the fact we are probably looking for a private key rather than a password to be able to ssh in.

We also see that the ssl certificate has the commonname of valentine.htb. Adding that to the hosts file and checking the site brings back the same thing. No virtual host routing for us here.

So, gobuster has done it’s thing and found some stuffs. It’s all the same for both http & https, which is slightly odd.

Let’s go look at some of these files.

Within the dev folder, we have a couple of files. There is a notes.txt file:

These are good clues to the encode/decode if a directory enumeration didn’t work.

Hype key is slightly more exciting, we get a load of hex:

I don’t personally read hex off the bat, so I might need to work this out!

Let’s carry on and see if decode is anything useful.

So over at /encode/ we have an input box:

Putting in hello in the box gives us:

So our input it being converted to base64 (trust me, I checked).

If we use the decoder to decode that:

So a simple straightforward base64 encoder and decoder.

I’m not going to lie I was expecting different.

Let’s go back and take that hex from the file, copy it into a local file. Let’s use the built in tool xxd to convert it to strings.

We get an RSA private key! 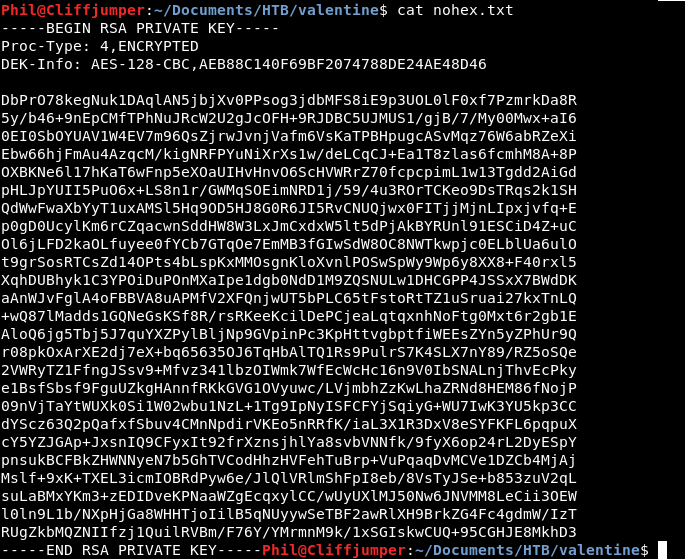 Hopefully we can use this for ssh methods. Although we don’t know a username….

Let’s try it with root anyway, just in case.

First we need to change the permissions of the key

Then try to ssh in:

Asked for a passphrase. Not what I was expecting but also not fully surprised there are more steps to this!

I think this is where the encoder/decoder comes in. The encoder is php, so can we get it to run a system command after our input?

Let’s ping this over to repeater and try some stuffs!

So PHP command injection is what we need here. There is a pretty good cheat sheet we can take some ideas from.

Running through these with whoami into the encoder, then going through the decoder to see if we get a different answer at any point is the plan.

I thought I might have had a breakthrough with:

As only the hello came back. Whereas everything else saw the whole thing as text. However, it didn’t seem to do what I needed. Similar with having 2 &&s. I also though a null byte would be good (%00) however that didn’t work.

We need a new attack vector. SSH is the only other port we have.

A google of that, brings up a lot of walkthroughs to this box, so I think I’m on the right lines here!

Let’s avoid those and carry on. It looks like this version of ssh is vulnerable to the heartbleed vulnerability.

A bit more clever googling than normal to avoid the spoilers, gets us to some github pages with scripts to run the exploit, the one I used was here: https://gist.github.com/eelsivart/10174134

Downloading the script and running it, we need to give it the server, we then get a result! 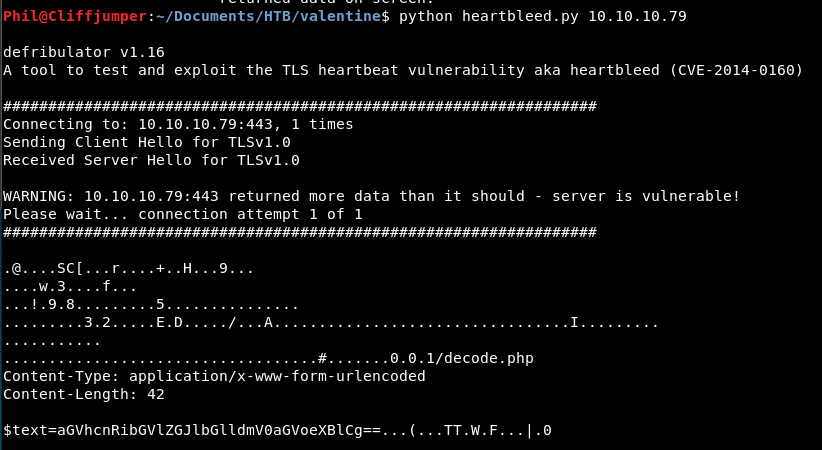 You see at the bottom, that’s some base64. What the that going to say?

Decoding it on my local box, we get “heartbleedbelievethehype”

It does. That’s good!

Ok, maybe that’s the password we need? or part of that is the username?

So it looks to take the password for the key. Then asks for our password, so I think this is the ssh key password. We just need to find the right user.

We have no other clues for that as of yet. It’s worth trying the same thing, so:

It didn’t work. As expected, the password is right though, as I copied the wrong thing first and got re-prompted for the password.

That got me in. That’s very odd! I didn’t really expect that to work, but I couldn’t find anything else.

I would have thought a whoami command on the encoder/decoder would have been better. This was pure guess & lack of other things to try.

Anyway, we are in!

Annnd, there is the user flag! Excellent!

Let’s get LinEnum over as a first step!

Start up a python HTTP Server on my local box:

Give it permission to execute and

We know that 12.04 is vulnerable to dirtycow/dirtycow2 but we are going to try and avoid that route!

Group membership and SUID files can be interesting.

The hyper user is part of:

A SUID file has:

This could be something we can execute due to being part of the dip group.

The other super interesting part, is there is some bash_history in the hype directory.
It’s not much but it might be enough to give us a clue:

I think as a starter, we will do look in .devs.

That is not something I would have quickly found without that bash history!

dev_sess is a socket. I’ve not come across one of those before.

From the linux guide:

The manpage has a whole heap of information. However, the program “socket” which is used to create the connections isn’t installed. So maybe this is an absolute rabbit hole?

There is an exploit called dirtysock which is similar to the socket route. There is a check to see if the system is vulnerable:

However, snap is not found as a command. Bugger!

The other interesting thing in the bash_history is the fact it was done with tmux. Is there a tmux issue we can exploit?

A quick look brings up a few resources.

Firstly, we need to see if root is running tmux at all.

I just realised, that guide is exactly for this box, without mentioning this box. That’s annoying!

Anyway, looking at the tmux guide, we need -S which is the “socket-path” So we are going to connect to the socket using tmux.

So I was close from the off, using that bash history to see the socket issue. I should have also clocked tmux but I know now this is a really useful flag for the future! 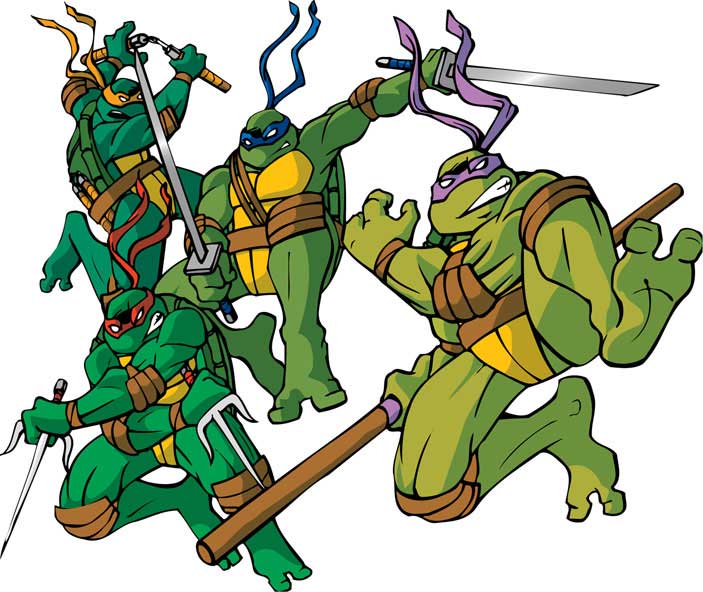 So post root. I looked at some guides and most people seemed to use dirtycow. So shall we have a go at that too!

We did this as part of Lampino the vulnhub box, so let’s check that out!

Getting the exploit code from exploit-db.

Copy that into a file on the target machine. We then need to compile it:

Unfortunately g++ isn’t installed on the box. So let’s compile it on our local machine.

So on my local machine I have a dcow executable, let’s get this across using our python simpleHTTPServer.

Running that on the box and we get an error:

Let’s try a different method of dirtycow. We can get source code from github.

We compile this one with:

We now have a dirty executable.

Running the exploit, we get prompted for a new password, we use hello as always.

Then the script seems to hang…

Looking at some reviews, this appears to be normal. The advice is “run it a few times”. This is crazy messy, but there there you go!

I got bored of waiting for the exploit but could su anyway, so it obviously worked. 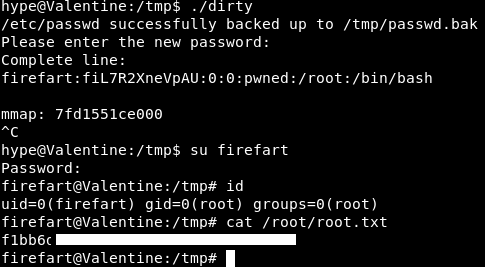 That was dirty, we got root in 2 different methods. The actual planned way was simpler and more straight forward, but always good to have a backup and be able to exploit lack of patching!

Anyway, see further up for my root dance!