Here we are, another box from the OSCP prep list by TJNull.

This box is Shocker and we are going to start by running a quick nmap.

We have 2 open ports:

We get some results:

So port 2222 is ssh. It’s OpenSSH 7.2. We also get some information disclosure with the keys, so we are probably looking for a ssh key to be able to get into this server.

A quick searchsploit shows there is a Username Enumeration exploit we can try later on:

We will get a gobuster running here.

Not many results there.

While it’s running, let’s do a full port scan!

No new ports found. Let’s also do a UDP scan

Our gobuster has finished and we have nothing. We also don’t have much on these nmap scans.

I think there might be a clue in the picture. Maybe some stego. I see “Don’t bug me” as a command, so what we need to do is “bug” it.

First we need to install steghide if not already installed.

Then we want to extract the data

Annoyingly, we get python errors!

Right, let’s move on. Our gobuster finished and found nothing. Our UDP nmap has finished with no results.

Gobuster tends to not let me down, but there is so little to go on, let’s take a look at dirbuster.

We use the same wordlist and set it to search for extensions including, php, html, htm, bak, txt

I’ve also set a bonkers gobuster going to include loads of extensions and the wordlist.

It’s ridiculous but I want to have something running while I look at the ssh potential exploit.

We copy across the python exploit

After a few non-starters we get the help menu!

So we need to give it the ip:port and a list of users

This is too many failed goes, we are gunna lose any greens. Instead we pipe it into a file where we can grep for [+] later on!

So we have our tools running, I guess it’s coffee time!

Due to piping the python script into a file, we can’t see what it’s going, so a good tool is:

This tails the file in real time, so you see the live output but it’s still in a file for easy grepping later.

Right, dirbuster is the first to hit. It’s found:

Let’s go have a look! It downloads a shell script. Looking at the file we have:

Let’s capture the request in burp and see if we can do anything. It’s just a GET request for the file, not sure what I can do here!

A quick google of “exploiting a sh file on a webserver” brings back a thing called “shellshocked”. This ties in with a) what we have and b) the machine name!

Let’s do some more reading on shellshocked and we should be able to effectively get a limited shell via this user.sh file!

So the PoC shows using curl to get files, let’s try it:

Of course it did!

I am genuinely shocked, that’s absolutly bonkers to work. So it adds in some HTML to do the request.

Well let’s be honest, we know where the user flag will be!

Now, our nmaps earlier showed information leakage regarding ssh keys, so I wonder if the keys are around anywhere. It would be good if we could do a ls.

That’s cool, however there is no .ssh folder which I thought there might be due to the ssh keys we saw earlier.

So, let’s try and get a reverse shell. We can just use nc through our limited shell right?

Unfortuantely it dies straight away.

Boom! Amazing! We are in! 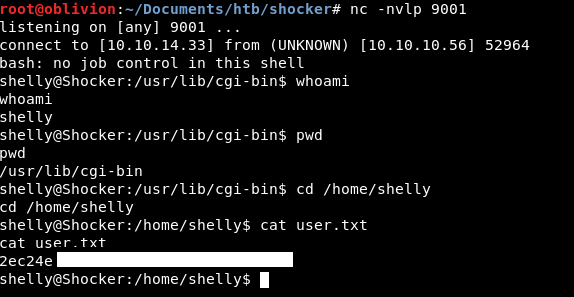 (also proof that I got the user flag!)

Let’s move LinEnum across to the box. Hosting it on a python webserver:

Then downloading it on the box

Running that, we get all the results.

Looks like shelly is part of a lot of groups!

We also check sudo -l to see if we have any sudo priviledges and we do:

So we can run perl as root!

In fact it’s just a command, so we can just use this off the bat.

We start our listener and boom, connection!

We are indeed and there is the flag!

You might be thinking, you got that priv esc very easily and quickly, did you cheat?

I did not. I did however do the box Bashed yesterday which also uses sudo -l as a privesc, so I now check for it every time! 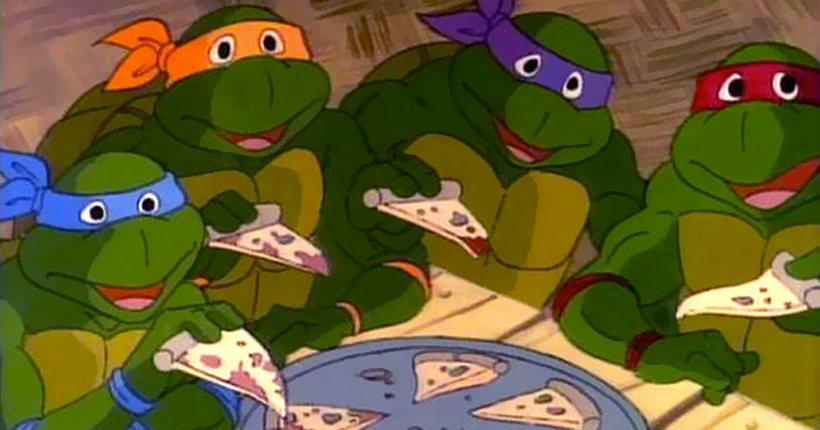 Also I realised my username enumeration script was still running. It hadn’t found shelly yet!