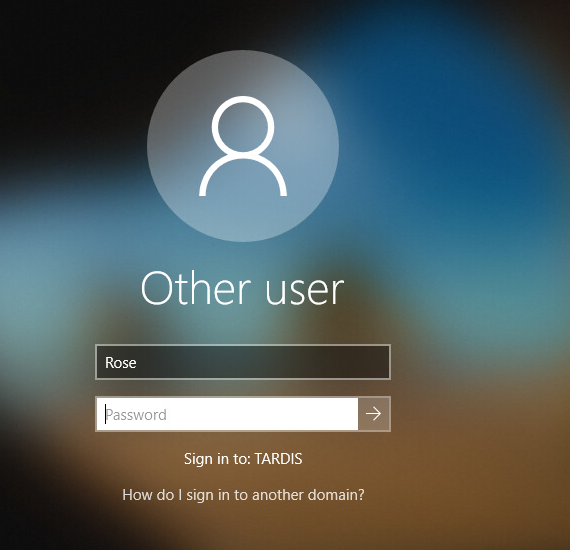 This is quite exciting for me, this is Episode 1 in my official Learning Stuff series with the tagline: “Knowing stuff is cool, learning just takes longer”.

The video that accompanies this blog is available here: https://youtu.be/ZKrkkUlssAE

This series is going to go through a set of different attack, defence and general pentesting theories and practicals. The idea is hopefully I can explain things to you in a way that helps, maybe that others haven’t. We shall see!

So first up, before we can do anything specific, we need to build a lab! For this I’m using an ESXi host that I have access too, however the same thing can be achieved by using VMWare on your own machine.

I ideally wanted to build the lab using Packer/Terraform/Vagrant however after many hours of trying I always ended up failing, so I’ve parked that for now until I get more time. Hopefully in the future I’ll have a blog about that sort of automation. However for the moment, I am just going to spin up boxes the old fashioned way, however I’ve got a whole bunch of powershell to make it slightly easier.

The hardest bit is choosing the domain, computer and user names. But I always like to theme things, so for this I’ve gone down the Dr Who route! What my lab will consist of for this video is:

Firstly go through the normal Windows set up: 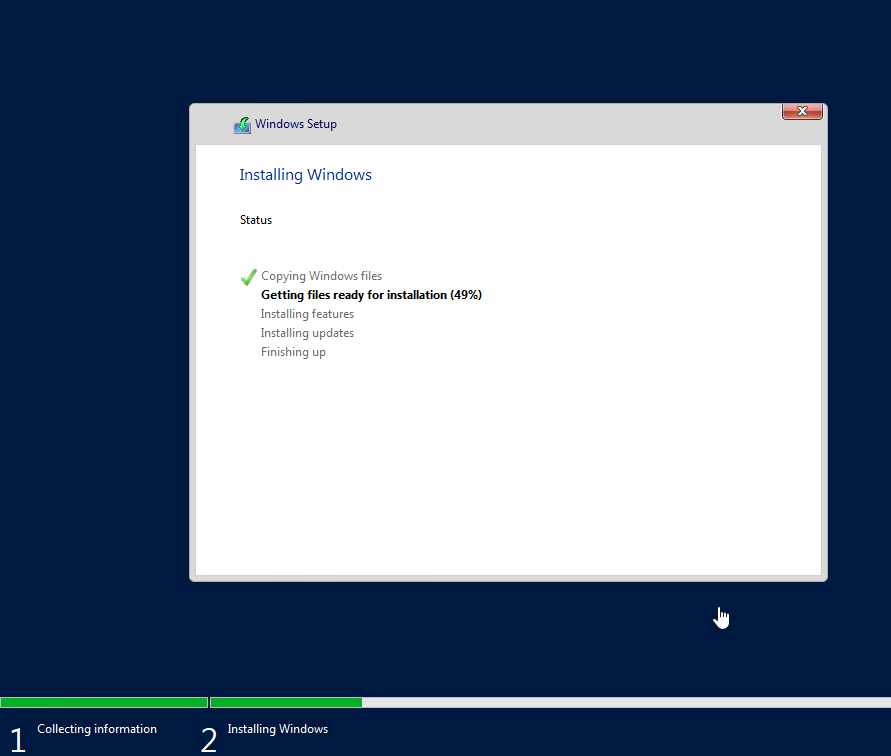 Once both the Server and Win10 machines are booted. We need to set up a few little things. This powershell script will set the Hostnames and IP addresses which will allow the connectivity we need.  On the lab I’m using, there is DHCP set-up so I don’t have to set up the IP manually, but I’ve left it into the powershell script for you to use, obviously change the variables to suit your lab.

If you haven’t set up Active Directory before or a lab at all, and want to do it without Powershell, my friend myexploit2600 has written an excellent step-by-step guide.

First up we need to configure the Server and add Active Directory. After that we can sort the Win10 machine.

The machine will then re-boot so these changes have taken affect. Re-log into the Server. 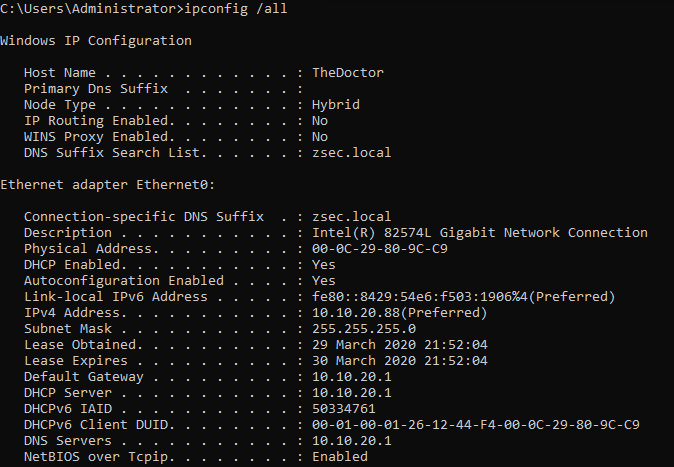 Once we have the correct hostname and network connectivity, we can covert this server into a Domain Controller. It should be noted that this isn’t relevant for this lab specifically and with running responder it’s possible without. However I’m going to use this lab in the future, hopefully looking at some domain based attacks, so I might as well set it up right from the off.

To change the server to a Domain Controller, we need to install the Active Directory modules, again this Powershell script should do it all for you. Just change the domain variables at the top.

This again will reboot, log back in and we now have a domain up and running! 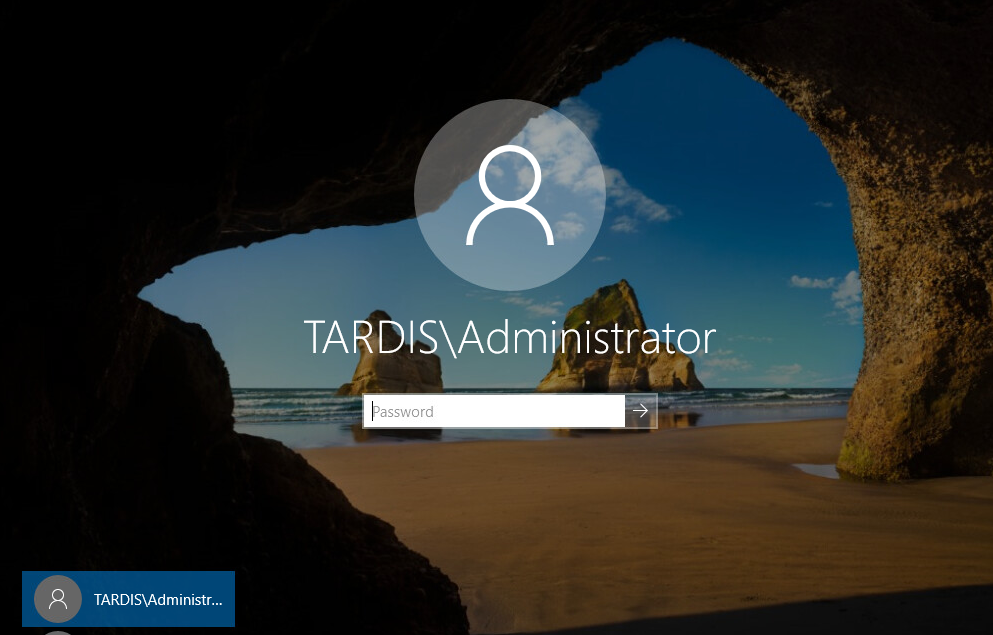 Now all the domain needs is some users. Again I like to stick with a theme! Change the variables to suit your own environment (I know not everyone will want a Dr Who based Domain)

If lots more users are required, it’s worth creating a spreadsheet or similar with the information and importing it, as I’m only currently adding 2 users (one user and one admin) I’ve just put it all in variables.
To check that the users have been added, it’s worth looking in “users and computers” to check the OUs and Users are where they should be. 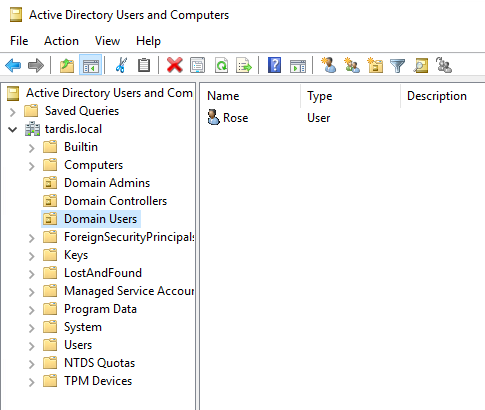 This script also then elevates Clara to a Domain Admin by joining her to the DA group. This will allow that user to add other computers to the domain and other privileged rights. 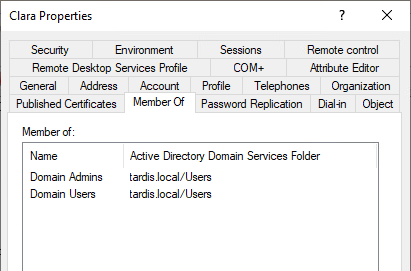 A good tip with Users and Computers is to enable “Advanced Features” by going to View -> Advanced Features. This then gives more property options on each OU and users.
Once that is done, we have a Domain set up with some users, with different permission levels. At a later stage, I’ll set up some group policies and other hardening bits and pieces but these aren’t required for the moment.

Let’s now turn our attention to the Win 10 box.
We firstly need to set the hostname and the IP address as we did before. However on the Windows 10 box, before we can run scripts, we need to set the Powershell bypass policy, this will allow any scripts to run. This is a really bad idea in corporate environments, but is fine for our private lab. 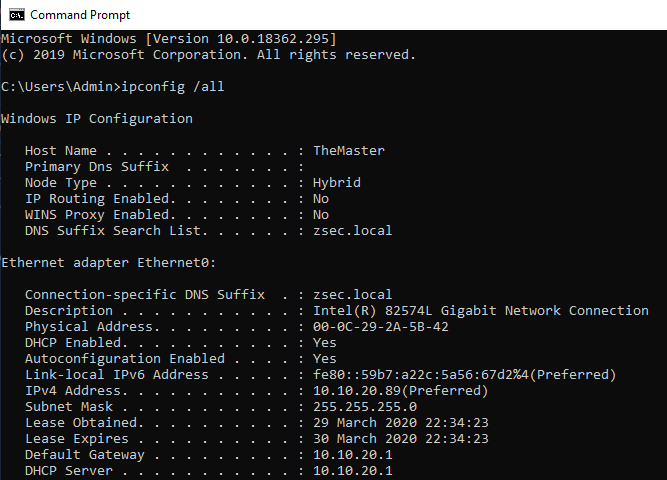 Once that is configured, we need to join the machine to the domain. This will make that connection to give access and be able to log in using the domain user and admin that we created earlier.

Now that’s done. We can log back into the machine with the domain creds that we set up earlier on TheDoctor.

What we also need on this network, is a Kali Linux box for doing the attacks from. I’m not going to go through how to set up Kali but hopefully it’s easy enough.
For a lot of the attacks, it will be interesting to see what’s happening on all machines. So I’m going to download and install Wireshark on all machines.

That’s it, we now have our lab set up. It’s bound to grow and evolve over the course of this series, but this is a good place to start!

Next up in Chapter 2 I will look at responder, starting with setting up shared folders, creating a regular task to check the share and capturing some hashes. I’ll also do a deep(ish) dive into the traffic going across the network using Wireshark.

If there are any other attacks you’d like to see me do and explain. Please let me know on twitter.

Hope you enjoyed this and keep learning!!